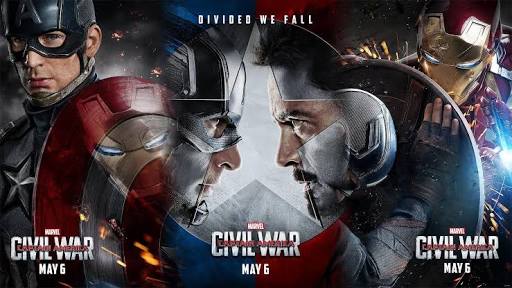 Hey guys, how’s it going? Rahul here coming in with a new blog! Yes! I saw it today guys! Sorry I didn’t post anything yesterday guys I was kind of busy. So, without further a do, let’s begin the blog of Captain America: Civil War!

This superhero, action film was directed by Anthony and Joe Russo and produced by Marvel Studios. It evolves from the Marvel Comics.

In 1991, the brainwashed super-soldier, Bucky Barnes, is dispatched from a HYDRA base in Sibera to intercept an automobile carrying a case of super-soldier serum and assassinate its occupants.

Approximately one year after Ultron’s defeat in Sokovia at the hands of the Avengers, Steve Rogers, Natasha Romanoff Sam Wilsom, and Wanda Maximoff stop Brock Rumlow from stealing a biological weapon from a lab in Lagos. Rather than be captured, Rumlow blows himself up. Wanda tries to displace the blast into the sky with telekinesis, but it destroys a nearby building, killing a number o Wakandan humanitarian workers.

At the team’s headquarters, U.S. Secretary of StateThaddeus Ross informs the team that the United Nations(UN) are preparing to pass the Sokovia Accords, which will establish a UN panel to oversee and control the Avengers. The team is divided: Tony stark supports oversight because he feels responsible for Ultron’s creation and Sokovia’s devastation, while Rogers has more faith in his own judgment than that of the government.

At the conference in Vienna where the Accords are to be ratified, a bomb kills King T’Chacka if Wakanda. Security footage indicates the bomber is Barnes, who T’Chaka’s son, T’Challa, vows to kill. Rogers decides to bring Barnes in himself because Barnes is an old friend and the authorities plan to kill him on sight. Rogers and Wilson track Barnes to his hideout in Bucharest just before a German commando team raids it. As Barnes and Rogers escape the building, they are also attacked by T’Challa, who is the superhuman Black Panther. After a destructive chase, they are all cornered and arrested.

Helmut Zemo tracks down and kills Barnes’s old Hydra handler and steals a book containing the trigger words that activate Barnes’ brainwashing. He infiltrates the Berlin facility where Barnes is held and recites the words to make Barnes obey him. He questions Barnes, then sends him on a rampage to cover his own escape. Rogers stops Barnes and sneaks him away. When Barnes regains his senses, he explains that Zemo is the real Vienna bomber and that he is heading for the Siberian Hydra base, where other brainwashed super-soldiers are kept in cryogenic stasis.

Knowing that they will never catch Zemo in time if they wait for authorization, Rogers and Wilson decide to go rogue, and recruit Wanda, Clint Barton, and Scott Lang to their cause. With Ross’ permission, Stark assembles a team composed of Romanoff, T’Challa, James Rhodes, and Vision, as well as Peter Parker, to capture the renegades.

Stark finds evidence that Barnes was framed by Zemo and shows this evidence to Wilson, who gives him Rogers’ destination. Without informing Ross, Stark goes to the Siberian Hydra base and strikes a truce with Rogers and Barnes, unaware he was secretly followed by T’Challa. They discover that the other super-soldiers have been killed by Zemo, whose real goal was to find proof in Hydra’s archives that Barnes murdered Stark’s parents in 1991. Zemo is Sokovian and wants to punish the Avengers for the death of his family by turning them against each other.

This movie is like any marvel movie. Full of action, complicated yet more than interesting story and always related to the other Marvel movies. Yes, if you haven’t seen any other Captain America movie or Avenger’s movie this one will confuse you! But if you have seen the movies one can see why I would say this movie is fantastic! The best of the Captain America movies. We see the introduction of the new superhero ‘Black Panther’. The use of all the characters was wonderful and the action scenes were absolutely fabulous!

I would give this movie 4/5 stars.